Why Tartan was Banned in Scotland! With photos of our beautiful tartan garters of course… 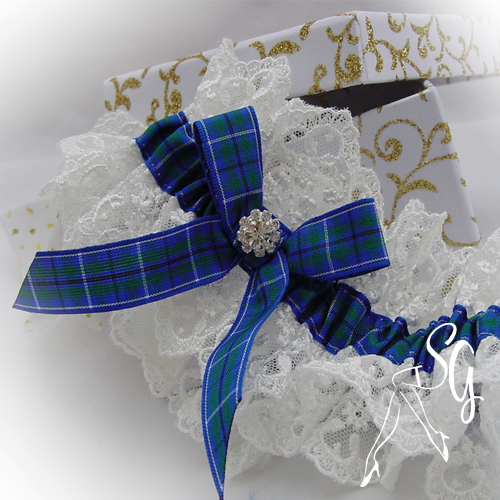 Royal Stewart, Black watch, Buchanan, they are so much a part of British fashion, you would think they have been around forever, however many are only a hundred years old or so, in the form that we know them…With Scotland deciding whether it wants to be independent today, I thought it would be a good day to write this postI have a bride wanting to surprise her H2B with a Macintosh tartan garter and she said it had to be the ‘Modern tartan’. The picture she had and the photo I took of our silk fabric weren’t quite the same, so she searched online to find out more….She found ten different Mackintosh tartans available.

“Is there really different types for the one family name?!…In asking that I found this link that has lots for that clan so maybe it’s just the colours and layout which are roughly the same that matter?! Do you know more/otherwise?”

So I thought I should know more about it, and set out to find out!

Apparently ancient tartan designs were local to an area, where weavers would use natural dyes that were easily available, they weren’t unique to one clan and several different tartans would be worn at one time. 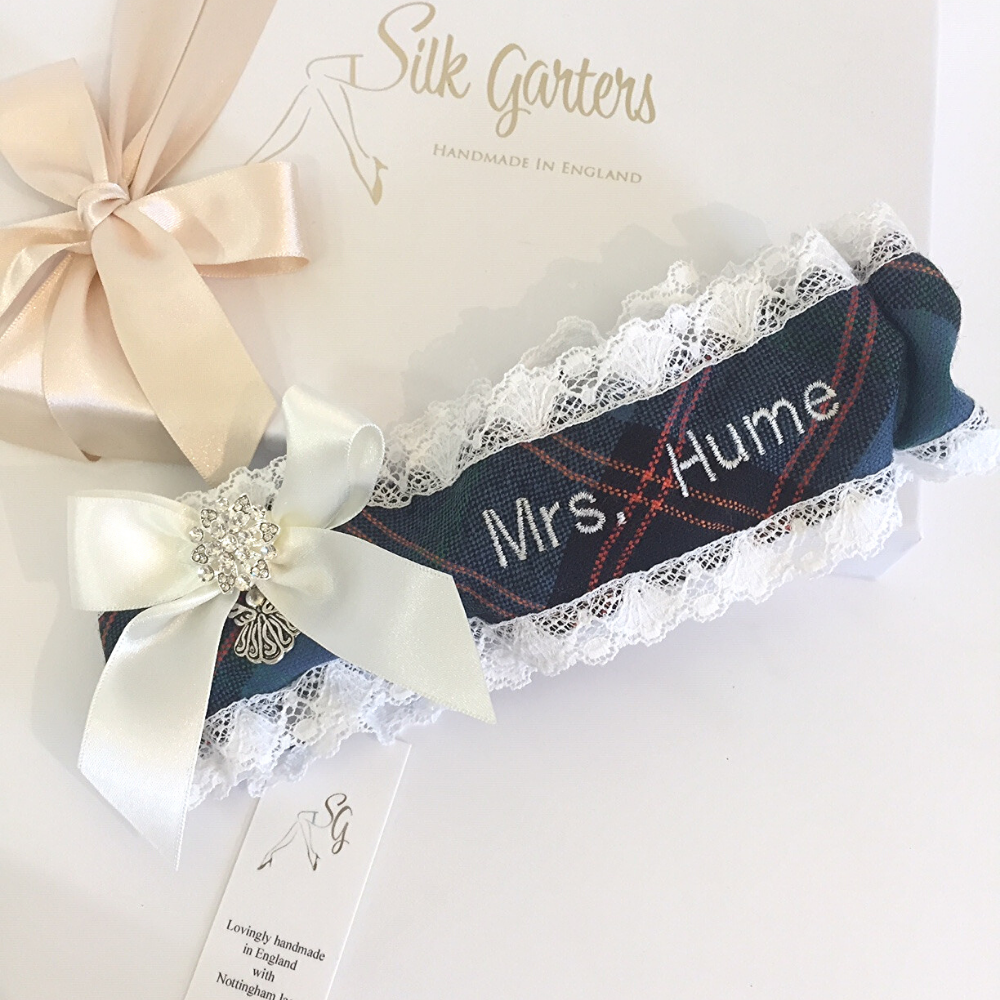 In 1746 tartan was banned in the ‘Dress Act’ except when being worn by Highland regiments in the British army. It had been associated with Jacobean fighters, when some of the fiercest fighters were Scottish clansmen, wearing tartans.

The ‘Dress Act’ was repealed in 1782 when the government came under pressure from the ‘Highland society of London’.

William Wilson & Sons of Bannockburn was the leading tartan cloth manufacturer in the 1770, with contracts to supply the military. They recorded over 200 tartan setts (designs) by 1822 some were numbered, some they gave names to like ‘Robin Hood’ but none related to a specific clan. This collection is now in the Mitchell Library in Glasgow. 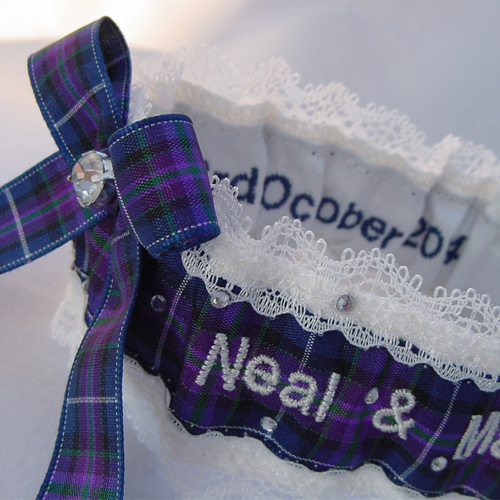 The pomp and ceremony surrounding King George IV visiting Scotland in 1822 increased demand for tartan fabric and it was made the National dress for the whole of Scotland. It was at this time many new Clan Tartans were invented.

The official registration and naming of tartans began 8th April 1815, the ‘Highland society of London’ who had campaigned to repeal the ‘Dress act’ wrote to every clan chief

“be respectfully solicited to furnish the Society with as Much of the Tartan of his Lordship’s Clan as will serve to Show the Pattern and to Authenticate the Same by Attaching Thereunto a Card bearing the Impression of his Lordship’s Arms.”

Many had no idea what their clan tartan looked like…Alexander MacDonald, 2nd Baron MacDonald of Sleat, wrote back to the Highland Society,

“Being really ignorant of what is exactly The MacDonald Tartan, I request you will have the goodness to exert every Means in your power to Obtain a perfectly genuine Pattern, Such as Will Warrant me in Authenticating it with my Arms.”

Queen Victoria and Prince Albert made their first visit to the Highlands of Scotland twenty years later. They bought Balmoral and furnished it in ‘Scotts Baronial’ style using the Royal Stewart tartan and Hunting Stewart Tartans for carpets and the Dress Stewart for drapes and furnishings.

They invented their own tartans, that are still used today. Their children wore highland dress and the fashion for tartan swept the nation. Around this time chemical dyes started to be used making the tartan fabric designs much brighter.

Each clan has several tartan designs, normally variations of the same design e.g. Stewart has royal Stewart with a red base and dress Stewart with a white base, hunting usually has a green base ( but was never used for hunting!) Ancient is usually a ‘faded’ version reminiscent of natural fabric dyes. In the 1970’s a new version of muted tartans were introduced that were between the bold Victorian tartans and the ancient tartans of natural dyes. 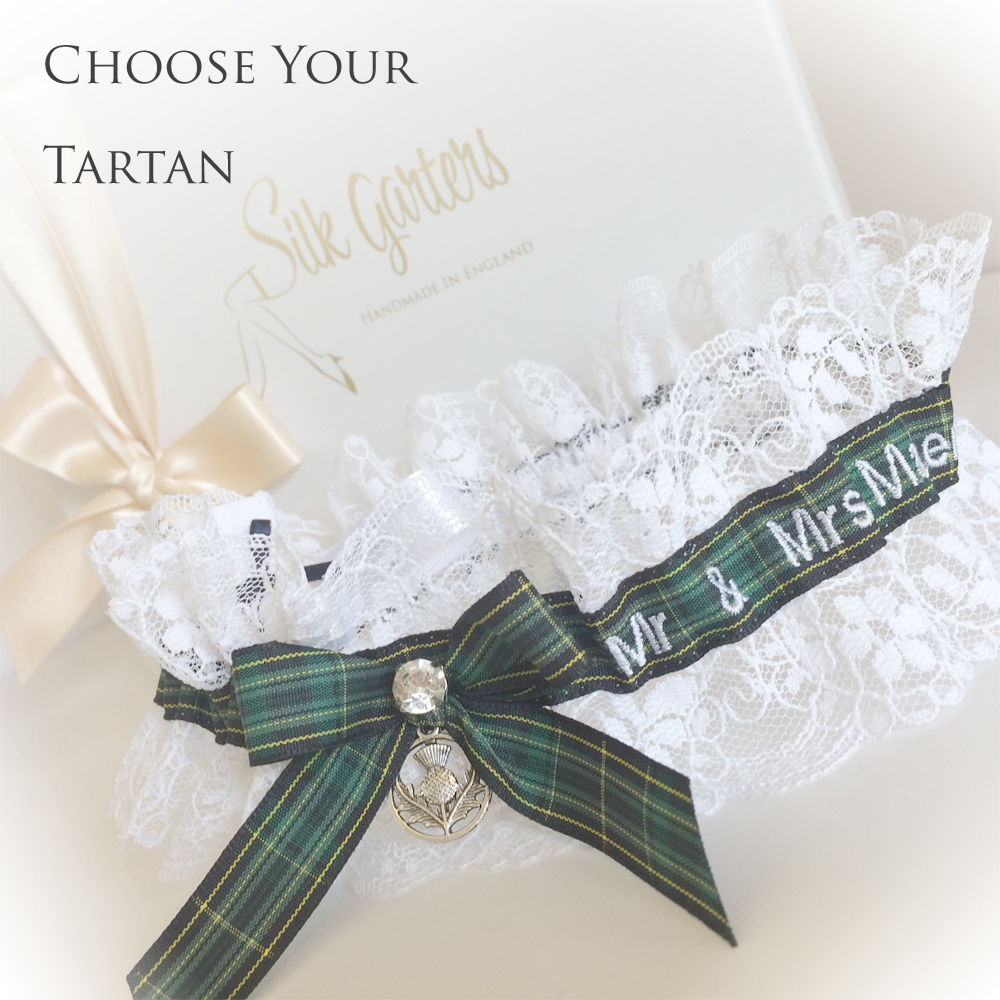 I’ve been asked for lots of different and unusual tartans lately, we keep many in stock for garters but also provide a service where you can have one made out of a tartan tie because a tie is quite often more easy to come by than the actual fabric…

Tartans aren’t limited to clans, many companies, clubs and associations have their own tartans. Below is a Lynsey having fun with her Glasgow Rangers tartan garter … 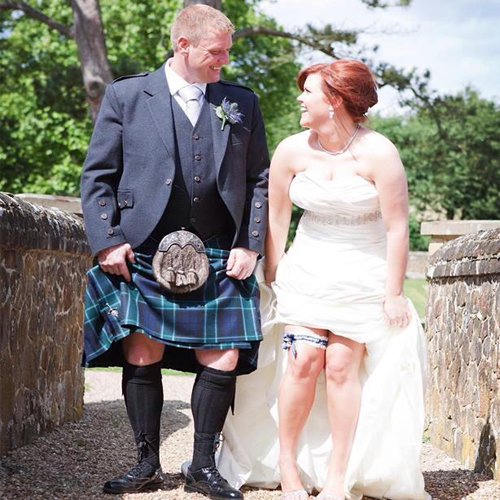 I love history and I’ve really enjoyed my little forray into researching tartan, I hope you find it interesting!

If you’re interested in any of the garters pictured, they can be made to order. Don’t forget we can make your tartan fabric into a special garter just for you, just give us a call 44(0)77 8080 1102